Aging Stereotypes.  So many books that discuss  life after age 60 emphasizes 'how to hold onto' adulthood. These books view Aging as a decline, a series of losses that continue until you reach the ultimate loss - the loss of life itself. This view of live after age 50 fabricates Aging Stereotypes - and it is  mistaken.....seriously mistaken.

Currently much of the developed world  seems to favor adulthood. Adulthood is viewed as the peak of human development. (Of course the fact that most practicing psychologists and gerontologists are adults could have something to to with that.) But really. Our years after adulthood can not only be meaningful but they can form the peak years of our human existence.

There was a time when children were seen not seen as having a development cycle of their own. Children were viewed as 'little adults' and nothing more.  But then Jean Piaget described  childhood is a distinct phase of human life. He showed that childhood was  not just 'adulthood writ small',  that children's lives and development are a worthy of scientific study. Result? The field of child psychology grew.

Pick up any college catalog today and you will see many courses about childhood and its  'stages'. Basic to all these courses is the idea childhood and adulthood are very different phases of lie and that moving to adulthood is the  goal of human beings.

'Adulthood' is viewed as THE goal. It is seen as the most important  stage in life. Adults make the economy work, they give birth to and raise children. They create laws, lead the nation and are generally viewed as the 'movers and doers' of society. There is nothing in adult psychology that mirrors the notion found in child psychology that this particular stage of human development is a preparation for a new and even more important stage  such as the third state of life, Elderhood.

Instead of modern textbooks viewing Elderhood as the 'crowning achievement' of life (as once was the case) we are offered an Aging Stereotype - that  the stage of life after adulthood is  a time of inevitable decline. This is  The Aging Stereotype. (and like all stereotypes, it is not really true.)

(Note how the stage that follows adulthood is called 'aging' - as though going from age 1 to age 29 or 29 to age 59 is NOT aging.) The Aging Stereotype describes our last stages  of development as a long, slow decline  - a period of losses and grieving the bygone days of adult power and prestige.

Such are the fundamental beliefs of the Aging Stereotype. Those who hold this view spend much energy trying to figure out how to 'hold onto' adult characteristics and skills. At the same time they refuse Elders any of the power and prestige of adulthood - even if elders retain many of their  skills and interests.

The Aging Stereotype is at best a false view of human development and at worst it is degrading to those living the last third of their lives.

There is an alternative to the Aging Stereotype.  There is a view that holds there are at least 3 major stages of human development: childhood, adulthood and elderhood

AND that goal of human existence is progressive growth though these three stages. Why? So that at the end of ones life you are ready to move on because you have lived a full and complete human life. You have been a child, an adult and an elder. You have learned the skills and experienced the joys and sorrows of each state. Life is complete.

So Elderhood is the third stage of human development. And using this name removes any Aging Stereotypes. (It also removes current bias about the primacy of adulthood.) 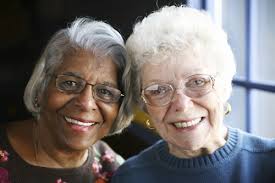 Still I have yet to see a course on Elderhood listed in any college catalog. Oh, there are courses in gerontology and aging. And most of these concentrate on 'inevitable decline' and 'how we can help these people'.

Now of course there are losses as you move into elderhood. Just as there were losses when you moved from childhood to adulthood. But somehow in the current state of things only the losses of adult tasks and powers are seen as losses that 'count'. No one speaks of the losses children face as they move into adulthood - only those that adults face when moving into Elderhood.

Perhaps this skewing of psychology towards the primacy of adulthood refelcts the fact that most academic studies are done by adults and adults have not yet lived as elders so they do not appreciate it.  They have no experiential knowledge of their own elderhood and so they judge everything from of their own bias concerning the centrality and importance of adulthood.

To understand this unconscious bias towards their own adulthood, consider what would happen to views of Adulthood if most of what we knew about it came children.  Children have no personal experiences of being an adult, they ,too, would concentrate on what a person loses in becoming an adult.

Ask children what it is like to be an adult and after they say a few good things related to power or prestige, the children are likely to talk about things that are lost in becoming an adult. Depending on their age, children say that in Adulthood:

Just as children can not value what they do not know, so too adults. If children were to write all  the textbooks about adulthood, the texts might be full of advice as to how to hold onto some of the joys and experiences of childhood. Just as adults who DO write the texts about Elderhood give advice about how to 'hold onto' aspects of adulthood but offer NO INSIGHT into any of the special joys or tasks of Elderhood. So it is that the Aging Stereotype of 'inevitable decline' continues year after year.

Adults have NOT experienced the joys of Elderhood. Once they get past a few cliches, they tend to focus on the losses that they, as adults, will experience. Adults do not perceive the positive values of elderhood because they have no clue as to what they are.  It never occurs to adults to ask elders what they like about being in this state of life. And even if they do  ask, most adults have no real context to appreciate the answers.

So what can we do? We who are elders need to read the works of other elders. We need to rethink the current views of Aging.  And that is what this web site is about. I hope you will read more....and come back and read again.

Comment? If you are an elder and want to offer a comment or insight into this issue, please use the form below.

Have Ideas About This Topic?